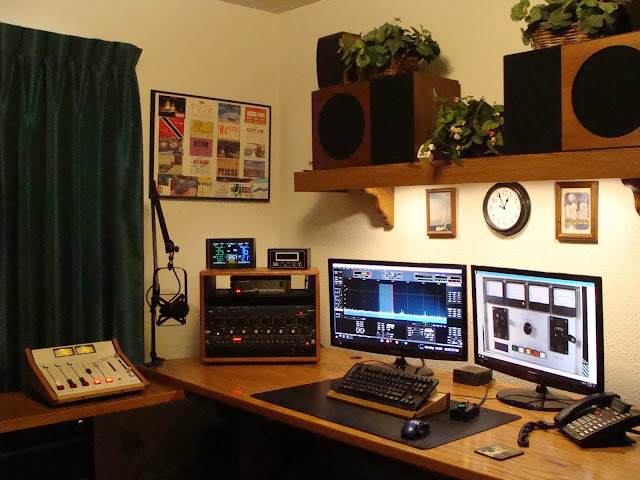 I am using an Anan 100B radio. All of my amplifiers are located in the basement and monitored on the computer screen via a web cam. The 8877 is shown in use on the second computer monitor.

The desk rack contains audio gear for both transmit and receive. I am using an EV RE-320 and a Symetrix 528E to drive the Anan. Receive audio sources are fed to a Rane SM26B mixer and that drives a Symetrix 420 connected the JBL speakers on the overhead shelf.

You can also see the computer that I use. It is an Intel NUC8i5bnh and sits most prominently on the desk between my two monitors. It has 16G of RAM and a 256G NVMe hard drive. It measures 4 inches by 4 inches by 1 3/4 inches tall. The processor is a quad core i5. 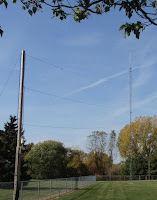 My antennas are all dipoles, centered on a 65 foot Rohn 25 tower about 250 feet behind the house. The center insulators are homemade and attach directly to the tower leg. The only weight that the actual antenna has to contend with is the weight of the wire element itself.

QSL Note: I love paper QSL cards and if you send one, I will return one of mine immediately. Otherwise, I QSL via QRZ logbook. I do not use LOTW. 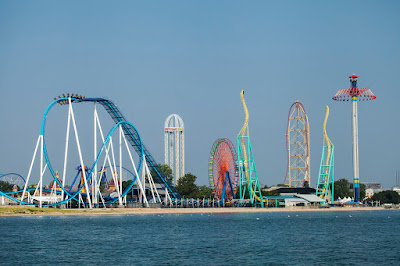 Sandusky is the home of Cedar Point! Cedar Point is a 364-acre amusement park located on a Lake Erie peninsula. In 1870, a local businessman, opened a beer garden, bathhouse, and dance floor on the Cedar Point Peninsula. Over the years, the area became a more and more popular destination for relaxation and leisure. In 1892, the park's first roller coaster,  the Switchback Railway, was built. A hotel called the Bay Shore Hotel was opened in 1899. Cedar Point's second roller coaster, the Figure-Eight Roller Toboggan, opened in 1902. Cedar Point is owned and operated by Cedar Fair and is considered the flagship of the amusement park chain. Known as "America's Roller Coast", the park features a world-record 72 rides, including 17 roller coasters – the second-most in the world behind Six Flags Magic Mountain.

I live close to the park and while sipping coffee or a glass of wine on my patio, I can sometimes hear the screams!

Left is a screenshot from Ron K8FG of my signal while talking to Jim K8IH. The software shows a SNR of 48.9 db. Of course, IMD is measured from the peak of my signal to the products, N O T  the noise floor.